We took Aaron to the city this morning. Everything went very well, he met nice people and enjoyed the trip.
Until he got sick on the way home...
He'll grow out of this some day, I am sure. :)
I took some bird shots the other day that I want to share with you all.
I have always been fascinated by Birds Of Prey, the bigger the better.
I love the way they float through the air and the regal look, the sharp eyes and and and...
So here they are...
Unfortunately I had to crop every one of those photos so they are not so sharp, but still. It's the birds that matter, and not
➜ Click to READ FULL POST......
Posted by Michaela unter Saturday, April 24, 2010 12 comments: Links zu diesem Post

Aaron's first trip to the beach!

Our great car is all equipped now to make every trip an enjoyable one.
I am speaking for the dogs - of course.
The windows in the back wear sun protection film and last week I installed (Hasi helped of course! ) special grids in the back of the trunk. The grid is fantastic, you can open it on both sides and lock one or both sides.

That is how Aaron is traveling these days...

We went to the beach in Åhus, it was the first time for Aaron.
He was very excited about

I have my macro lens back!

After I had bought my Canon 400D some years ago I also bought a Sigma lens for it, 28-300mm macro. Some day it fell and... it was broken, therefor laying in a drawer because I thought it would be too expensive to repair it...
About two weeks ago I "found" it in a moving box upstairs while looking for something else and there it was. I took it out and remembered the "good times" we had together!
I brought it down stairs and started to look for a repair service here in Sweden.
I mailed to several addresses I had found on the net and had immediate answer from one.
He was so friendly to provide an address I could send it to, only to see if it was worth repairing it and to get an estimate.
So I packed it up the same day and mailed it. It took about one week till I got an e-mail from the repair service and the estimate was included.
It was only 85 Euros!!!

Its not the best lens when it comes to the aperture, but under nice weather and light conditions it is fantastic.

Our good friend Carola was so kind to pick me up at the autoshop yesterday morning to take me home.
(Our car got Solar Protection Film on it's windows now!!! That will help the dogs stay cooler in the summer when we travel... )
Carola did have Joey with her - of course he has to go where his mommy goes - and so it was logical that this was the right moment for him to meet Aaron and Cleo.

I have to say that Joey is a very confident little guy, and he's got a huge attitude too!
You should have seen him!
He was somewhat insecure in this situation, of course, but he handled himself quite smart.
Out of the car he started barking and made himself as big as possible to see if

Waiting for the swallows

The meadows and lawns are turning green and even the first branches grow foliage.
It's a beautiful sight, even on a thorn bush!

I got it all inside, that wonderful, happy spring feeling.
Birds singing, bees buzzing and so much more... the only noise I miss is

He's a very compact, funny little guy with lots of self esteem and curiosity.
He'll be a great playmate for Aaron!
:))

He was so proud when he got to carry my hat!
Isn't he adorable?!!

What a week!
Nice sunny weather, just a cold wind was spoiling the spring feeling from time to time.
We got a lot done this week. So much that I don't even remember everything.

I also got to take a lot of new photos with my new camera :))
Today for example...
I sat on a chair in the garden and the dogs were playing when a couple of

I was playing around with B&W yesterday, as you can see also on my Photo-Only-Blog.. ;-)
and I enjoy my new camera to the fullest! :))
Of course, having a good lens helps tremendously to create a nice atmosphere through focusing on what should come to our attention the most and putting the rest into "shallowness".
The Canon 70-200 1:2.8 is really awesome.
To achieve that effect of shallow depth of field I use the AV (Aperture mode) function on my Camera.
I have to say that

Yes, yesterday we filled the birdbath for the first time this year.
Not just for the birds, no!
Also for the dogs and Mika, because they love to drink from it.

Aaron, as curious as he is, had his snout right there where the water came out!
Obviously, he loves water!

Yes, I forgot to mention in my last post that we finally found a house!
We'll rent from 1st of June and hope to be able to move the last few days of May.
It's luckily not far from here, just a 20min drive south.
We'll be living near Åhus, that nice little town directly on the coast where they have the worlds best Ice Cream during the summer which is sold at the cute town square!
:))

The house itself is typical swedish, red with white.
We'll have a big garden, a big garage and a huge guest cabin.
I cannot offer any photos yet, but that will come of course.
We'll meet the owners tomorrow or Wednesday and the contract will hopefully be signed by the end of this week.
:)) 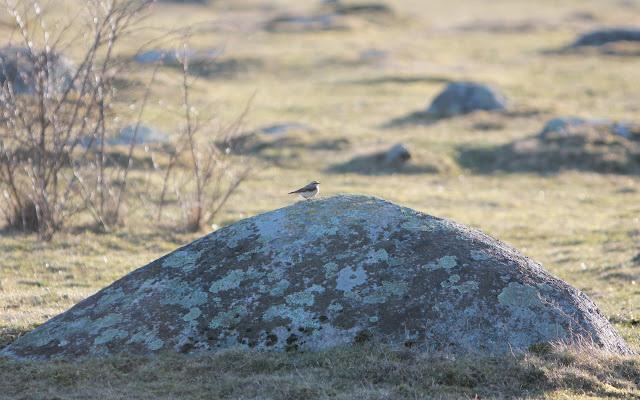 Can anyone help me out on this bird?
Is it a wheatear? (Steinschmätzer in german and Stenskvätta in swedish..) 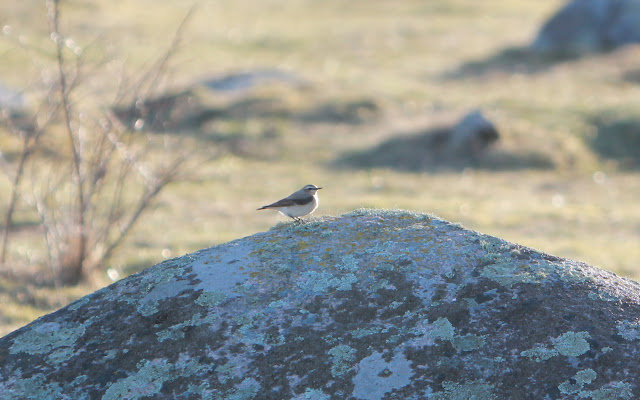 
The world is slowly turning green(er) around us.
What I mean is the vegetation in our area...
Look for yourself!
If you look closely you can see what I mean! 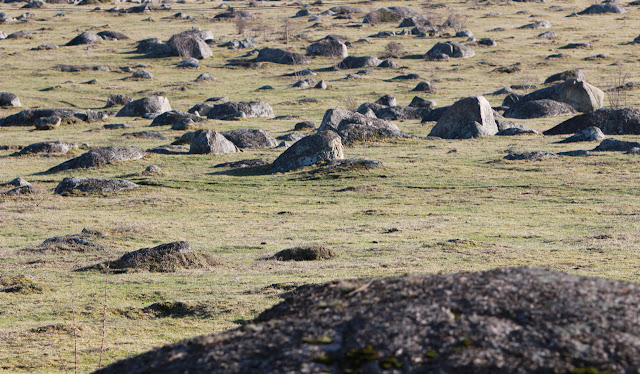 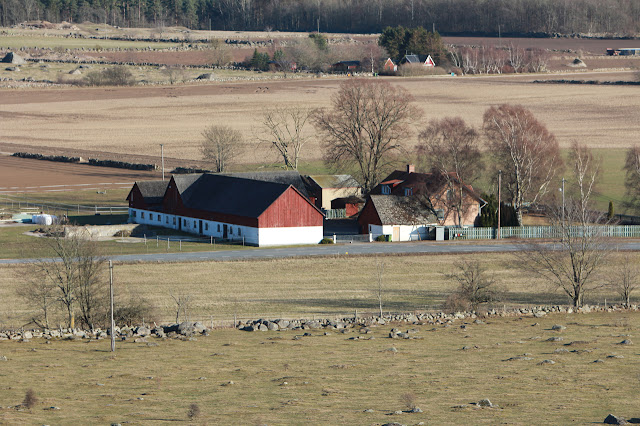 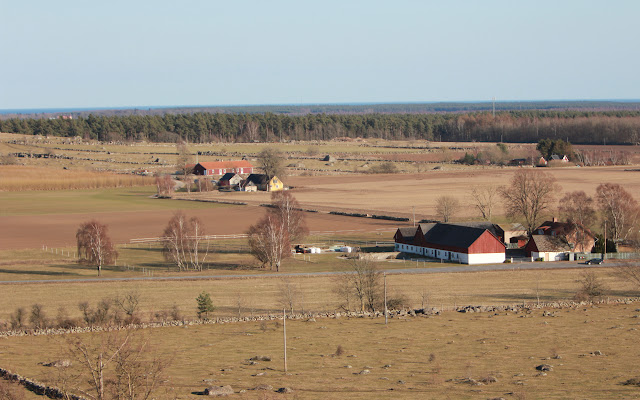 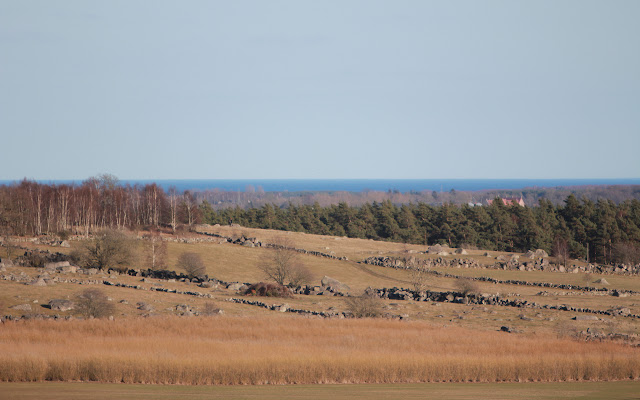 We enjoy clear skies these days which makes it possible to see the ocean as you can see on the last photo.
I took those photos yesterday when Cleo and I climbed up the hill in "our" little nature reserve.
It's great to be out and see natures daily changes and the progress of spring.
I bought a new Camera the other day!
It wasn't planned but happened anyways! :))
It's Canons newest model -
➜ Click to READ FULL POST......
Posted by Michaela unter Saturday, April 10, 2010 7 comments: Links zu diesem Post

We had a very nice Easter weekend.
Even though it was cold and raining most of the time.
We had nice times with family and friends and precious time with just us and our animals. 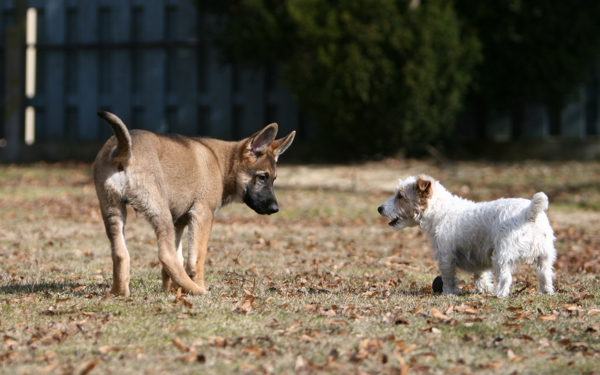 Cleo and Aaron are best buddies as you already know.
Cleo is still "leading" and teaching, but slowly and surely Aaron starts to grow in personality.
He does what a Shepherd does best - herding.
He herds Cleo, in a very playful way really.
She's still "boss" so to say, calls the shots, but even though Aaron is "smaller" in his mind, he's bigger in size - meaning he decides where Cleo goes and where she doesn't.
Not all the time, but very often...
A very funny thing to watch. 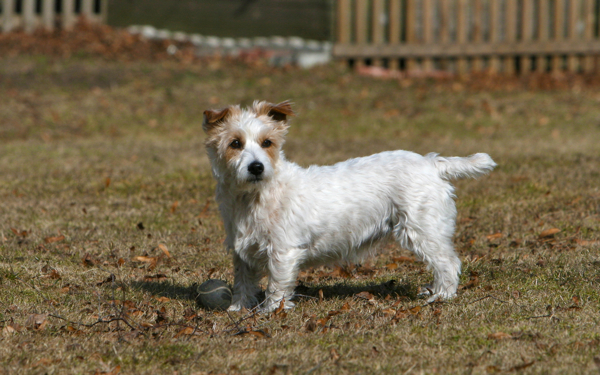 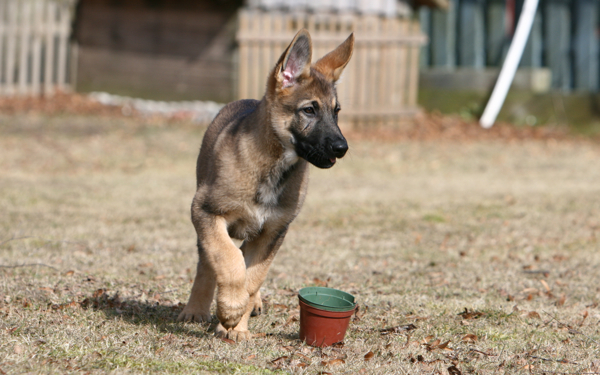 But Cleo doesn't mind, mostly.
We have the feeling that she is more tolerant with Aaron that she was ever with Barry.
Maybe because Aaron is going to be much stronger in his mind then Barry ever was.
And she knows that.
Another reason could be that Cleo gets older and is more experienced on how to deal with Shepherd energy...
Who knows. 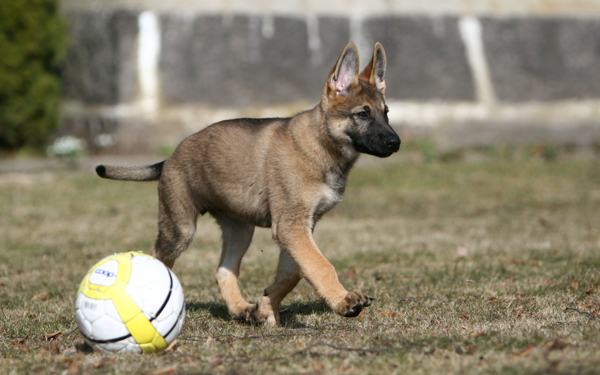 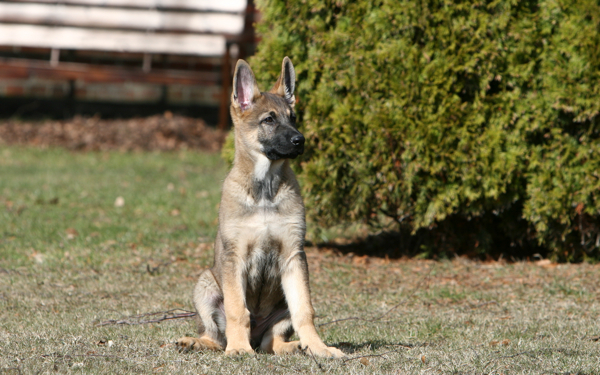 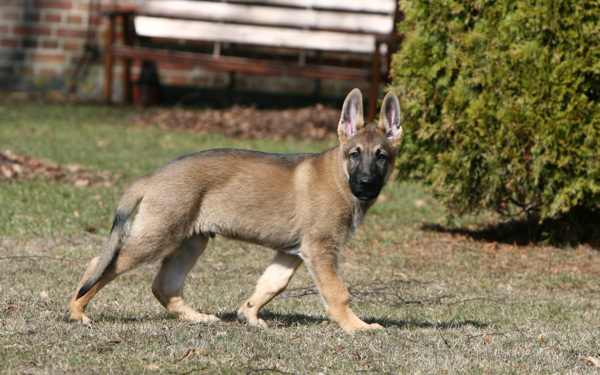 Aaron is a funny guy and he and Cleo are having fun together.

It's always nice to see a young animal grow and to discover it's personality and talents.
I would describe Aaron's personality as sweet, strong and honest.
His talents are many, his biggest asset is his nose.
He sniffs everything and everywhere, he loves to follow odors and to find toys he has miss placed.
One of his favorite toys is a tiny little soft ball - actually Mika's ball, filled with catnip.
He loves to toss and roll it around, and when he pushes it under a piece of furniture, he comes and asks for help to retrieve it.
He's smart without a doubt.

The house training is going well, we just had very minor little accidents lately.
His balance is getting better and better every day and he weighs already 15 kilos! :)

AND HE LIFTS HIS LEG WHEN HE PEES!

I know this blog has lately been almost exclusively about Aaron and his first adventures with his new family but I promise there will be other themes again as we progress into spring. :))
FRIENDS,
STAY TUNED FOR MORE SPRING NEWS AND ADVENTURES FROM SOUTH SWEDEN!
HAVE A GOOD WEEK EVERYONE!
HBFG
:)) ♥

It's the time of the year to see thousands (well in this case hundreds) of migrating Cranes while they rest before they continue their way to north Scandinavia where they will build a nest and raise their offspring.
I took following photos just half an hour south of here where they are feeding and resting, and they do so every year between begin of March and end of April.
It's quite spectacular to watch, even from a distance.
They parade and dance for each other AND they make lots of noise too.
:) 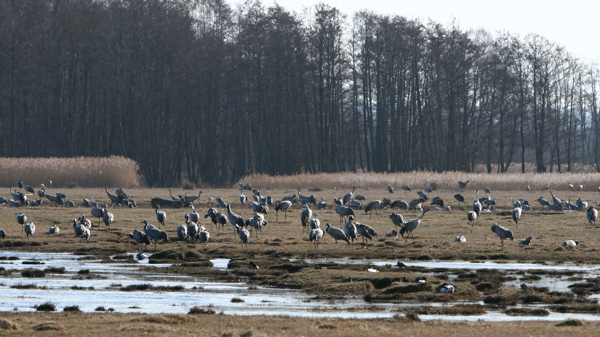 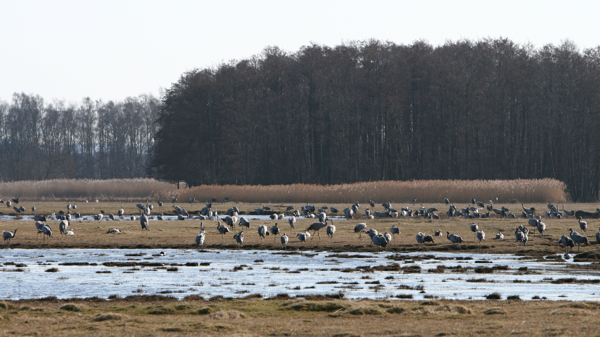 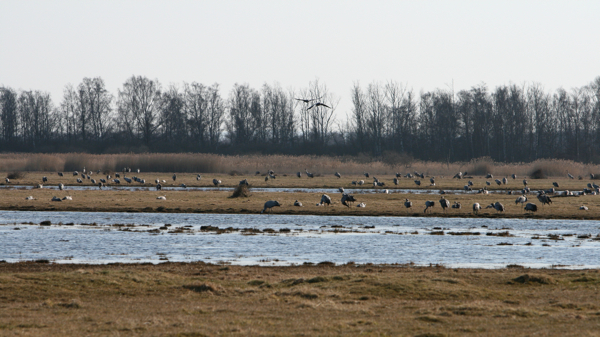 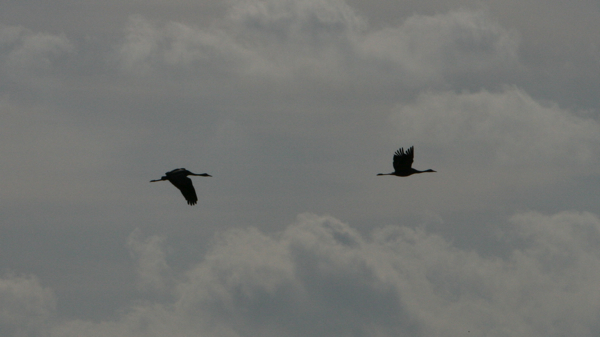 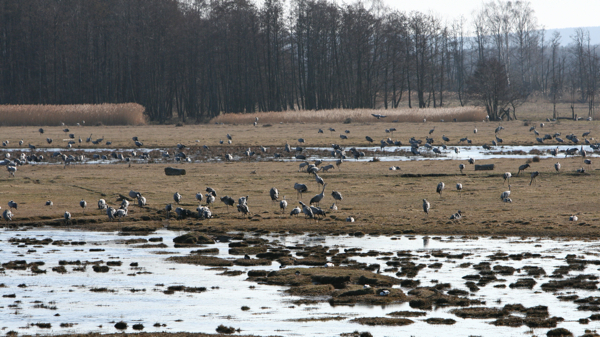 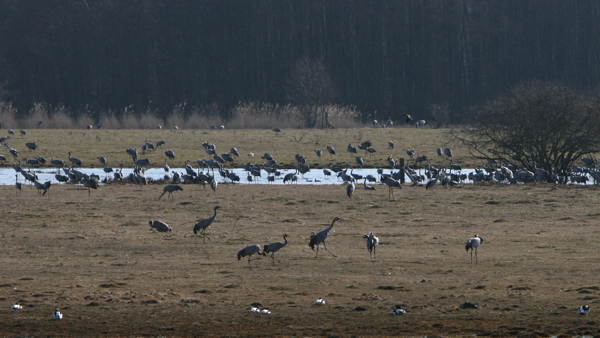 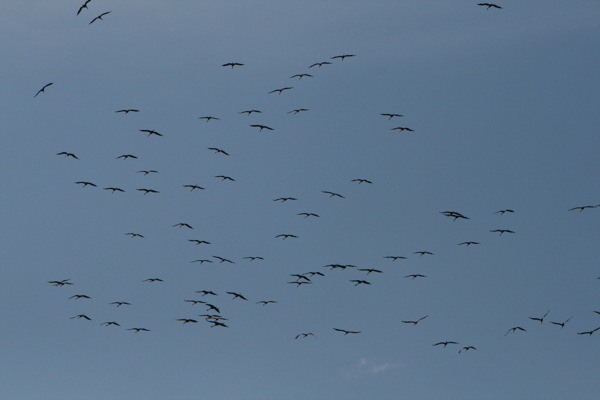 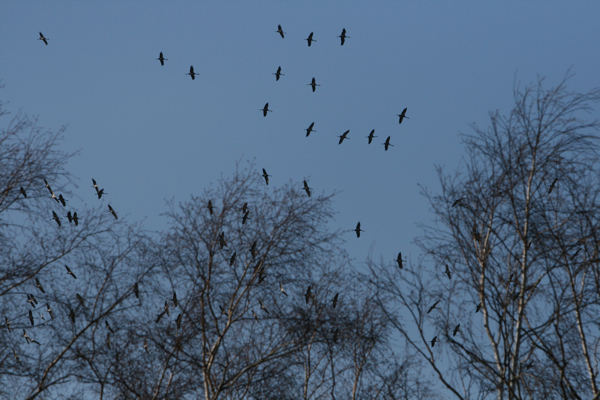 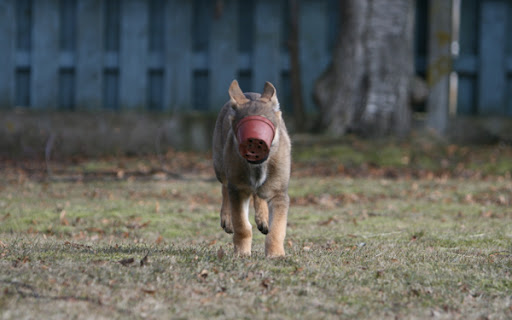 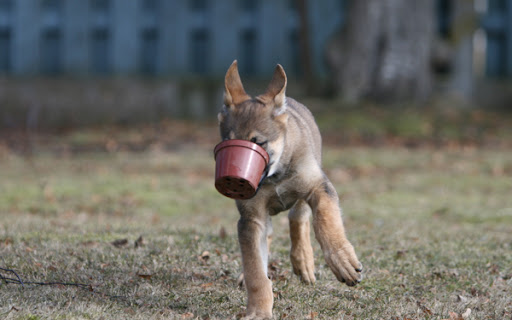 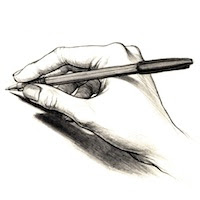 All photos posted on this blog were taken by me (unless stated otherwise). Please contact me for permission if you'd like to use any of them. Thank you.

You want to E-Mail me? 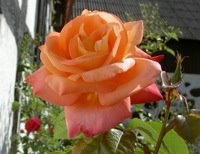